Farm animals. Cattle, pigs, laying hens, broilers, sheep, goats. Anything else? Yes, there are also the forgotten ones among farmed animals, a prominent example of which is the turkey.

The abattoirs of the 27 EU member states slaughter about 190 million turkeys per annum, which is 360 turkeys in every minute of a year. In spite of these huge numbers, the turkeys’ fate is almost entirely missing from the public and political debate. And so they are from the EU’s animal welfare legislation. Or to say it in the words of a study commissioned by the European Parliament: “There is no EU legislation which prevents poor welfare in turkeys. If there is no new EU legislation on animal welfare, turkeys will not be protected for most of their lives in much of the EU.”

What does this mean in practice? Turkeys are bred for extreme growth, in particular of the breast, crammed together in as little space as possible, suffer from injuries such as footpad lesions due to standing on litter soaked with excrement, and cannot express even most basic behaviour such as social behaviour, movement, foraging etc. Little wonder that the turkeys start to injure each other. The remedial measure, however, is not to grant them more space, open-air runs and enrichment (as in organic farming), but to cut the tips of their beaks.

Turkeys need help urgently, and so Green MEP, cook, organic farmer and businesswoman Sarah Wiener decided to make turkey welfare a core area of her term in the European Parliament. Shifting Values has the pleasure to support her with specialist and strategic advice. The main goal of Sarah Wiener’s initiative is EU legislation on turkey welfare. 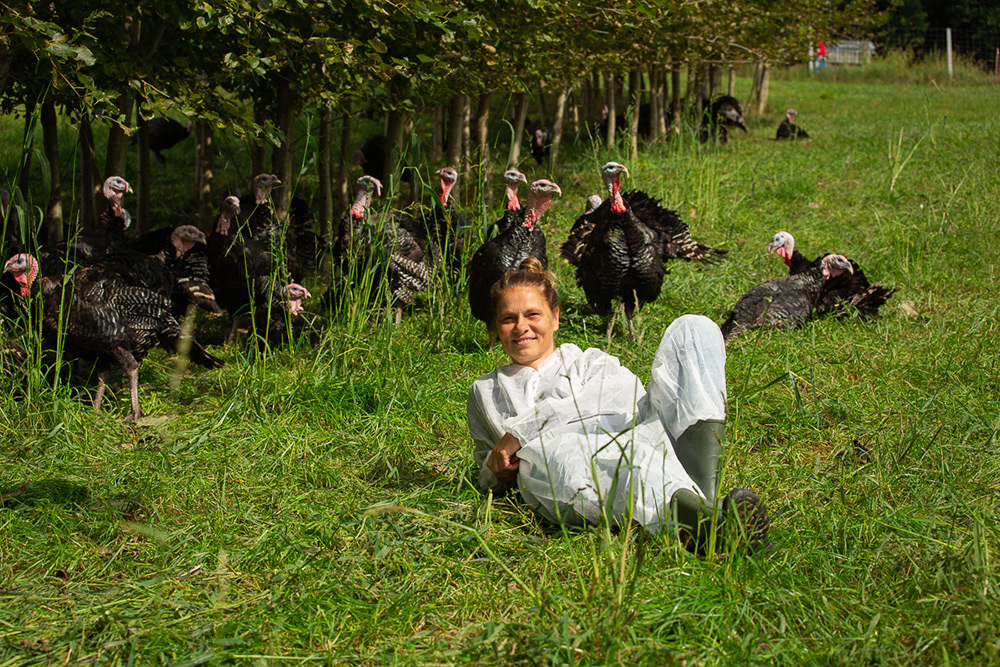 Austria may serve as an example in some aspects. It has the best legal minimum standards among the few EU member states that have specific legislation on turkey husbandry at all, and the Austrian government committed itself in its programme to strive for EU legislation on turkey welfare. The country is thus predestined to set a course.

The situation in Austria

Looking at stocking density – i.e. how many animals may be kept in a given space – as an important indicator, we find it to be about 50% higher in other EU countries than in Austria. In other words: 150 turkeys in Germany or Poland are kept on the same space as 100 turkeys in Austria. As adult male turkeys weigh more than 20 kg, this is a significant difference.

Of course, this also makes for a difference in prices. This is even more pronounced in the case of organic turkey farming, where the birds have twice as much space indoors and a large open-air run where they can live out many of their behavioural needs.

If purchase decisions are governed by the price only, better animal husbandry remains unhonoured. Austria today produces about as much turkey meat as 25 years ago, but self-sufficiency declined due to increased consumption. In the organic sector, four fifths of turkey meat is even exported. There is therefore a need for change, not only for individual consumers, but in particular also for the public sector, which still largely resorts to the cheapest imported products when procuring for hospitals, schools, etc. Public money is thus used to finance animal suffering.

This also points to the need for animal welfare labelling (as in shell eggs) and for a pricing discussion about the value of animals as food. In parallel, we need EU legislation on minimum standards based on scientific knowledge, which at least do not fall below Austrian turkey husbandry standards. And this is exactly what Sarah Wiener wants to achieve with her initiative.

We will keep you informed about the development of Sarah Wiener’s initiative for turkeys – animals in need.