Japan to harpoon both whales and the ban on commercial whaling

As of 1 July, the Japanese government gives the green light for the resumption of commercial whaling, thereby breaking several taboos.

The island state, who withdraws from the International Whaling Commission (IWC) effective by end of June after 68 years of membership, opposes the moratorium on commercial whaling, an internationally agreed and effective ban. It thus becomes the first state to kill baleen whales for commercial reasons outside the international body responsible for the regulation of whaling. In contrast to the two European countries Iceland and Norway, who also grant themselves commercial whaling quotas based on reservations against the moratorium, earning them equally sharp criticism by conservationists, Japan is now completely leaving the international stage of cooperation. The marine conservation organisation OceanCare calls on the international community not to tacitly accept Japan’s unilateralism and to push for a fundamental reorientation of the IWC.

“Japan harpoons whales and the Whaling Commission at the same time,” says Nicolas Entrup, Senior Ocean Policy Expert with OceanCare, worrying about the consequences of Japan’s unilateral action. “Now we will see, what significance the international community attaches to cetacean conservation. We expect the G20 summit starting this week in Osaka, Japan, to send a first clear signal.”

The moratorium is among the most important achievements in international species conservation. While on average more than 30,000 large whales were killed every year before the moratorium, this number fell to presently (still) 1500. OceanCare is further worried that all three whaling nations – Iceland, Norway, Japan – also disregard the international ban on trade in whale products. “This erodes and undermines international cooperation for the protection of endangered species,” criticises Fabienne McLellan, Head of International Relations at OceanCare.

OceanCare calls on IWC member states to work towards a thorough reorientation of the International Whaling Commission, permanently ruling out all forms of whaling except aboriginal subsistence whaling. The reorientation further shall turn the IWC into a body dealing with all the cumulative threats cetaceans are facing today. The Commission should also be strengthened by an enforcement body which monitors implementation of decisions and is entitled to impose sanctions in the case of non-implementation. 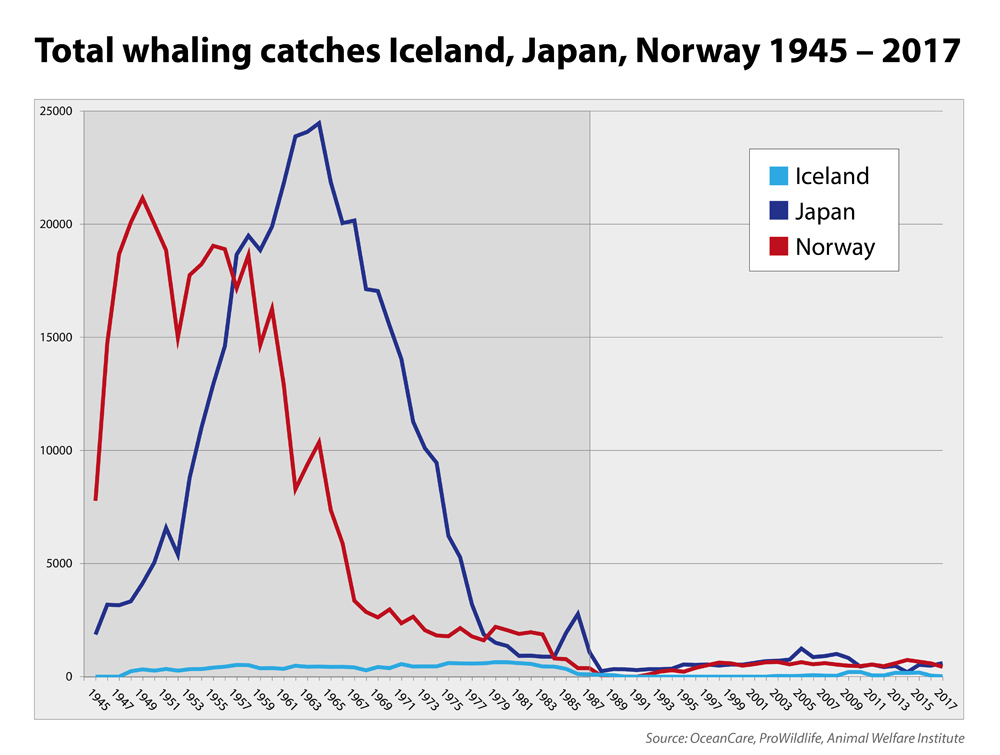 Japan compared to Norway and Iceland. In 2017 Japan was whaling nation no. 1.