Ever since his arrival at Tokio airport on 18 January 2016, Ric O’Barry, dolphin protection activist, former Flipper trainer, and protagonist of Oscar winning documentary THE COVE is being detained by Japanese authorities. His case is sparking protests and is calling principles of the rule of law into question.

Japanese authorities refused O’Barry’s entry by arguing that he may not be classified as a tourist. Ric O’Barry is well-known for denouncing all atrocities inflicted on dolphins worldwide. His detention by Japanese authorities now raises the question, whether you qualify as a tourist only if you don’t have a critical point of view on activities in the country you visit, or if you at least don’t voice your opinion.

Let’s look at this question using the example of the Austrian Parliament’s resolution of 29 April 2014: “We request the Austrian Federal Government to adopt a clear position against dolphin drive hunts towards Japan.” Let’s assume that the Austrian government, in the persons of environment minister Rupprechter and foreign minister Kurz, lives up to this resolution (as they should do). It’s hard to imagine that the two would be banned from visiting Japan.

Well, Ric O’Barry is certainly more of a challenge to the Japanese Government, given the widespread media attention to his activities. But is there a threshold to the expression of a critical opinion, like 10 TV programmes plus 25 newspaper articles = entry ban? And we might continue this bizarre mind game on and on.

The 76-year-old activist is in custody for almost three weeks now (on Feb. 5th, it’s 18 days). The only reason: his critical attitude towards hunting dolphins.

In December 2015, Ric O’Barry had been to Vienna at the invitation of Shifting Values and OceanCare for events under the motto #staywild. This included inviting the Japanese ambassador to a public discussion as well as asking for a face-to-face meeting. Both requests were denied.
This was followed by an action by two Viennese contemporary artists creating a picture that also wanted to illustrate the dialogue between people who don’t share the same opinion. 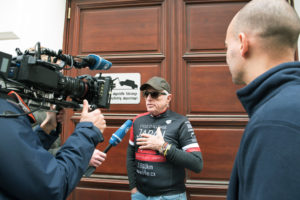 Ric O’Barry outside the Japanese embassy in Vienna.